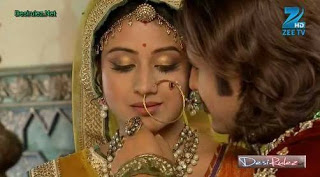 Scene 1
Tuneon Radio is a compilation of Ghanaian radio stations and over 1000 radio stations worldwide that our aim is to serve our cherished listeners well with what they want. We serve them with latest news update, political shows, sports, interviews, entertainment shows etc. Download the app and enjoy best of Radio Station and ur favorite programs here. Click on the link to download

jodha comes to ruks and ask you called me, ruks ask her to come and sit, jodha sits. ruks says day is beautiful, jodha agrees. ruks sees her earring and says its bend, I think you forgot to take it off before sleeping, I will make it right, she takes earring from her, she says I like to straight bend things, she gives earring back to jodha after making it right, she says you didn’t change dress of jashn, didn’t change it before sleeping, jodha says I was tired so, ruks says are you hiding something? jodha says no, ruks says your eyes are saying that you didn’t sleep whole night, must be playing with Rahim, she says you know jalal loves me a lot from childhood, he gave me this earring, he bought it from Kabul, after nikkah he spent most days in my room, its his habit that when he likes something he keep holding it, then many wives came and we becamegood friends then just being husband and wife but manhood is like this, they want destination, they run to catch destination and when reaches there, they try to find another destination, jodha ask do you need something, ruks says you know I am pregnant, I am giving child to jalal, I have Mughal heir with me so I want you to take care of me, jodha ask what you mean? ruks says have jalal’s biggest happiness, he wanted kid and its happiest news for him, I lost his heir earlier and there are still many enemies of jalal, I don’t trust any bandhi, I trust only you, you are good hearted women, she pretends and says see my feet are swelled, can you massage it, jodha is stunned, ruks says I feel bad to ask you this but you are most eligible for it, jodha nods and sits in ruks feet. jodha is doing massage of ruks feet, ruks looks at her and says will you take care of me? jodha says yes, ruks says now I got peace, I trust only you, she holds jodha’s hand and ask again will you take care of me for jalal’s unborn child, jodha lowers her eyes.