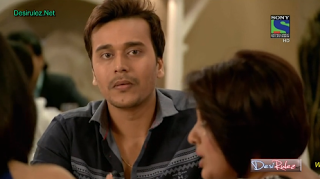 The episode starts with RK telling Pam that he was confused between her and Devika and since he had move ahead in life with either of them, he chose Devika on Ragini’s explanation. He waited for her for many years, but she was in her own words. She asks what about the promises he made when she came here. He says he does not have any justification and says he is tired of running away from himself, so he wants to settle down now. He is committed to Devika and will not leave her now. She will be his first love for ever.. He pats her cheek and leaves. Pam starts crying vigorously reminiscing RK shower of love towards her.. Jag suna suna lage….song plays in the background…
Devika tells Naani and Aman that she is very excited about her marriage and suggests Aman to marry immediately with Ragini after she marries RK. Naani asks Ragini if she got Junagad’s tickets. Aman asks who is going to Junagad. naani says badi naani is going as she is not keeping well now a days. Ragini says she has spoken to her agent and he will get ticket. Naani says she and even children are going. Devika asks Ragini to attend her wedding at least as she is the one who united her and RK.
Neil packs his bags and thinks he is going away from Ragini now. Pam comes crying and hugs him telling she is missing her dad. Neil calms her down and asks what happened. Pam says she is in love with someone in her younger days but did not move ahead as she had to take care of Ranbir, Agam, and Suhani, but now when she wants to settle down, Ragini spoilt her life. Neil asks what happened. She says Ragini knew her and RK’s love, but she forced Devika in RK’s life and brainwashed him against her. Neil asks her to be specific. She tells what RK told.. Neil asks if she means RK proposed her, but Ragini forced Devika in between them. Pam says RK loves her even now and he confessed, but Ragini brainwashed him. Neil asks her to stay here and leaves.

Neil goes to Ragini’s room and asks why she interferes in everyone’s life. She asks what did she do. He says why did she brainwashed RK against Pam and forced Devika in his life. She says RK was confused and sought her life, so she cleared his mind that he loves Devika. Neil asks when she knew RK and Pam loved each other from the beginning. Ragini says they were, but now RK has moved ahead and loves Devika. He says she brainwashed him and used her usual dirty tricksand dirty mind to prove herself right. She is playing with 3 lives now. RK will not be happy with Devika his whole life and neither Devika will as he will not love her at all.
Ragini says RK never told he loves Pam and told he loves Devika. He says he knew it. She says RK had told, she would have united them. Neil says she will not as she hates Pam. She says why will she hate Pam. He says she is lying. She says it is up to him to believe her or not and says if RK loves Pam, he would not have proposed Devika and it is too late and unethical. Neil says she is jealous of Pam as Pam took care of her children and they respect Pam more than her. Ragini says RK sought he help and she cleared his confusion, now nothing can be done.
Neil asks Ragini if she will decide what RK should do and forcing her decision on him as she hates Pam. She asks if RK told him anytime that he loves Pam and not Devika. He says RK will not marry Devika as he loves only Pam. She says if that is the case, she will convince RK to marry Pam, but he loves Devika and his priorities have changed. He says priorities cannot change love and asks if she can forgive his love and says she is making drama of moving ahead with Aman, but loves him. She says she has moved ahead with Aman and he should understand that.
Precap: Ragini tells Pam that she did not force RK to marry Devika. Pama asks her to stop telling lie with her crocodile tears and get out of her room.
The show begins with aman getting furious with ragini for being so close to Neil when she should be close to aman as they are engaged. They have never had any close moments They are always discussing nachiket. Why was this ?? She cared for na hiket so much. More than she cared for Dr Aman ?? Had she really moved on ?? Was she still feeling for neil ??


Aman pulls her close into his arms
Ragini is shocked and disgusted
She struggles and aman frees herself. He asks her to think over it
She gets a scratch on her arm
Neil pam , Aman. Ragini, get together and send all the kids out making excuses
Neil,asks ragini about the scratch on ragini’s forearm
Spaman replies it was nothing as he had held her arm a bit strongly
Ragini wants to discuss the wedding preparations of RK and devika
Ragini goes to pam’s room and finds her depressed
She wants to talk to her about RK


Pam does not want to discuss RK with her , she shoos her out rudely
Ragininasks if she still loved RK ??
Pam asks did she not know ?? Their love ? Their feelings ??
Ragini says in fifteen years things changed. Relationships changed,
Pam taunts her and makes fun of ragini they have argument how ragini separated RK and pam, she was responsible for neil’s separation from ragini, for arav’s imprison ment, for nishi’s failed marriage. Pam accuses just because she was not happy in life , she could not see pam happy with RK so she did this to make pam unhappy
Pam says arav was the happiest as he was in jail as she was far away from ragini because she destroyed all those people who loved her. Pam says all the people who loved ragini would move away one by one. She would be left all alone
Ragini tries to explain that she did not know pam and RK still had feelings for one another, loved one another
Pam tells ragini that she is unable to tolerate ragini even for 5 mins , she drags ragini out of the room pushes her out. Shuts the door onher face even as reluctant ragini requests her to come down and share with others about feelings for RK and clear things out
Devika and RK and neil are there as ragini comes there
Ragini asks RK if he really wanted to marry devika ??
Devika gets furious and says this had already been discussed and RK had already decided !!
Ragini asks RK to say this himself
RK says yes he wanted to marry devika


Neil then says RK was taking this decision under pressure Neil reminds RK how he had asked neil not to marry nivedita whom he did not love ?? Not to marry one girl if he had feelings for another girl ?? How was he committing the same mistake himself ?? Did he not have any feelings for Pam ??
Devika is annoyed with Neil and asks why were they bringing pam now ??
This matter was talked over and done away with why was neil bringing his sister in now ??
Neil,asks RK to think it over , if he was ready to marry the one he had no feelings for and vear the burden of responsibility all his life and continue ti murture feelings for the one he did not marry ? What was he doing ??


Ragini accuses neil of pressurising RK
Neil asks ragini to stop and not interfere as he was talking to his friend
Ragini had confused RK and thats why he took a wrong decision
Ragini retorts RK was not a kid he could take his own decisions as neira get into a heated argument RK interrupts them and asks them to stop
He says this was his life. His marriage and he would decide
Precap for tomorrow
He declares he had decided to marry devika
He tells neil that his sister had arrived here and was doing cheap acts and creating trouble
Neil gets infuriated and starts bashing up RK , he throws RK against a pillar
RK gets hurt on his forehead as he hits a pillar
Tuneon Radio is a compilation of Ghanaian radio stations and over 1000 radio stations worldwide that our aim is to serve our cherished listeners well with what they want. We serve them with latest news update, political shows, sports, interviews, entertainment shows etc. Download the app and enjoy best of Radio Station and ur favorite programs here. Click on the link to download
Share on:
WhatsApp